Shopping Cart
Your Cart is Empty
Quantity:
Subtotal
Taxes
Shipping
Total
There was an error with PayPalClick here to try again

Thank you for your business!You should be receiving an order confirmation from Paypal shortly.Exit Shopping Cart

As mentioned on previous entries, DR&D´s combat system is undergoing a serious revision.  After the release of DR&D Advanced1.0 more atention has been given to playtest and tuning, few sessions were enough to note some expected glitches and tweaks I need to implement, the main issue overall is that I might have given players too many Life Points, I had a moderately hard time killing enemy adventurers because of the defense dice scoring too many blocks, other than that (and considering I’m still working on spells and abilities) the system is playable enough.  I’m not entirely satisfied with the results nevertheless, although fairly consistent they´re still rough; I believe they can be fine-tuned a little further.

Having already started the project, the main and most important design decisions I faced were:

I’m inclined towards the dice pool mechanic for a game like DR&D. I believe it´s more engaging for the players, allows a wide range of design options and varied results, which in turn could be counter-productive if not worked properly...tell me about it!

I always liked HeroQuest´s dice pool mechanic for a light dungeon crawl, I believe it to be simple, more engaging as the attacked player gets a defense roll and “fairer” as more dice represent a greater chance just like in real life.  I’m not going through all the details about these mechanics as plenty of information is available online, besides I’m sure many people will know what I’m typing about, however some revealing articles have been posted on our FB page, in case you´re interested.

After doing some research and playing around with a dice pool calculator (great tool btw) I have to admit two facts: statistics isn´t that boring after all, and the actual chances and probabilities in the current advanced version of DR&D are not quite the ones I was looking for. Even though our current combat system is customizable enough and tends to be consistent, since it´s D6 based and using a single type of dice the results and improvement options are limited.

I want the Warrior to hit harder but less accurately than the Elf for example. I want the defense ratings to be partly random by adding either a fixed +1 bonus or a 4/6 defense die for instance, and so on.

I´ve figured that increasing the number of dice in the pool just alters the probabilities in a disproportionately manner, also that a small and limited pool provides more manageable results and works well with slight bonuses and penalties. Also that DR&D is intended to be a beer and pretzels game after all, so combat must be fair, fast and lethal from my perspective, just a simple mechanism to resolve attacks with some certainty…..and some cool spells of course

Further analysis revealed that a limited pool with varied target numbers on each die combined with bonuses and penalties could be the option I was looking for. I soon realized that the system I was seeking could be described as a mixture between HeroQuest, D&D Fantasy Adventure Board Game and Descent 2.0.

As far as I know, D&D FABG introduced this interesting yet simple system of using a limited pool with variations in target number. Assigning different custom results to the dice allows fine tuning and a wide range of customization. I have to point out that this system is originally a target DC pool system, so instead of comparing hits against defense dice results like in HQ, the attacking player must sum all his “swords” and compare against a  DC, the difference between the swords rolled and the DC is the damaged inflicted. There’re no defense dice rolled.

I´ve never played Descent 2.0 but thanks to FFG I was able to download the rules. Apparently it uses a similar system though just one (blue) “to-hit” die is used, it has an "X" on one of its sides, so if it´s rolled the attack is considered ineffective and the damage result is ignored. Maybe I’m missing something but, even though the game looks very promising, I’m not quite convinced by this mechanic. I believe some characters should have less to-Hit chance than others.

Taking the above into account, I want to share the first update on DR&D´s new combat system:

The combat mechanics remain almost exactly the same as in the previous version, though now the dice pool is limited to a maximum of three Attack and Defense dice respectively, plus the Special Action die. Dice come in different colors as shown in the following table: 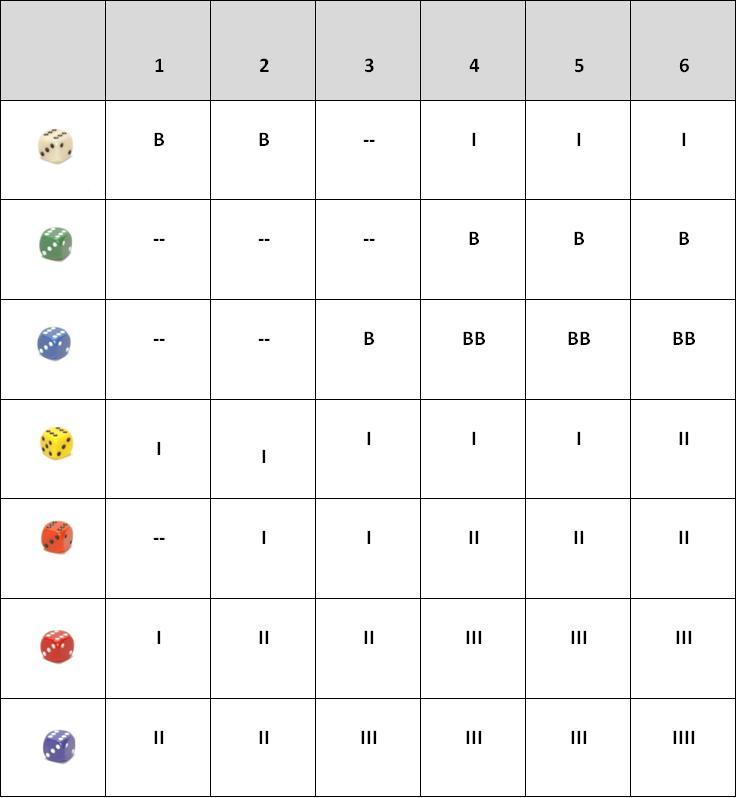 According to this table, the maximum possible Hits with three purple dice are twelve (though very unlikely), while a maximum of six Blocks are possible rolling three blue dice. Of course we have to leave room for magical and ability bonuses. I believe the attacker should have a slight advantage, like in HQ where the attack dice have 3/6 chance of hitting and the defense dice have only 2/6 chance of blocking.

I’m trying to adjust the whole thing taking the Warrior as a basis, considering a 50/50 to-hit chance as standard and work from there, scaling accordingly. Let´s take the Warrior and Elf for example: 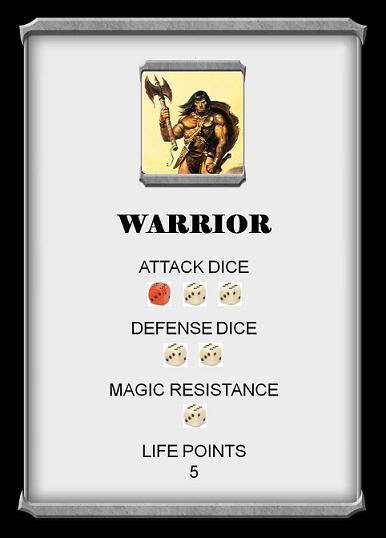 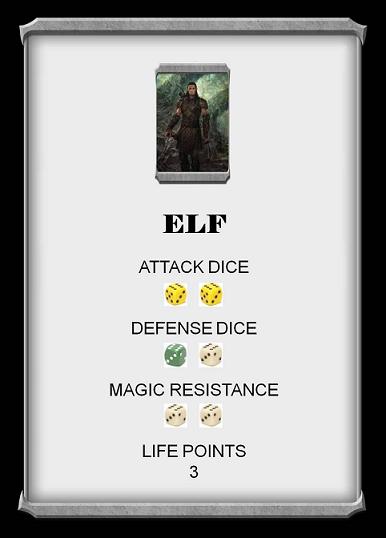 We can see that, while the Warrior has a better chance of delivering more powerful blows, the Elf has a higher chance of hitting, though with less damaging attacks. 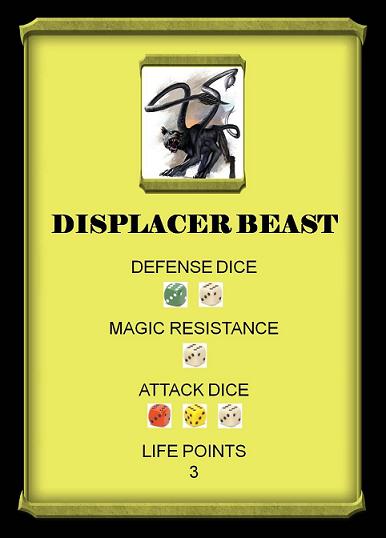 We can see that this monster may inflict a minimum of one and a maximum of five Hits and may block up to two. This way one can tweak the game and figure how monsters stack against adventurers and other monsters, considering the minimum and maximum hits they may inflict.

I have not yet worked a formula for obtaining the exact probabilities resulting from this system as I believe it involves more complex calculations. I ignore the exact probabilites resulting from the Warrior attacking the Displacer Beast for example, though close estimations are possible. I have to admit that my geekiness reaches alarming levels in some fields, but math never was my type of deal. In absence of a proper formula I´ve been working with approximations.

However, using a dice pool calculator I´ve been able to determine some of the average probabilities involved, which gives us a general idea of how the system works:

Those are the average white dice, same with HQ odds. I don’t need to be Einstein to interpret what the above mean. The pool is limited to three attack and defense dice respectively, which I believe keeps the results more consistent with the odds I’m looking for.

As you could see, those are pretty much the results you´d get under our current advanced version. I´ve decided to keep those standards as a base model and start tweaking from there.

The results are not that jumpy and tend to be predictable. However, I’m still looking for a formula to calculate the probabilities with combined target numbers in the pool, but the above gives us a general idea of the possible outcomes, and also a solid base to start from. Any help with the formula will be much appreciated and rewarded

That´s where we´re at right now. Any help, advice or suggestion will be much appreciated.

Oops, you forgot something.

The words you entered did not match the given text. Please try again.

How to get on the Dark Web Technically, this is not a difficult process. You simply need to install and use Tor. Go to www.torproject.org and download the Tor Browser, which contains all the required tools. Run the downloaded file, choose an extraction location, then open the folder and click Start Tor Browser. That's it. The Vidalia Control Panel will automatically handle the randomised network setup and, when Tor is ready, the browser will open; just close it again to disconnect from the network.

How to get on the Dark Web Technically, this is not a difficult process. You simply need to install and use Tor. Go to www.torproject.org and download the Tor Browser, which contains all the required tools. Run the downloaded file, choose an extraction location, then open the folder and click Start Tor Browser. That's it. The Vidalia Control Panel will automatically handle the randomised network setup and, when Tor is ready, the browser will open; just close it again to disconnect from the network.

Reply LesliepeN
3:54 AM on October 28, 2021
Our systems are verified, authenticated and encrypted by the most advanced digital security certification authority -Thawte.
https://offeramazon.ru

Reply Georgebag
5:36 AM on October 28, 2021
Our systems are verified, authenticated and encrypted by the most advanced digital security certification authority -Thawte.


I personally have never been to the store myself, unfortunately very far) But I made a purchase far from a single one, I was insanely happy with the purchases .. the quality is gorgeous
http://offeramazon.ru/zg5p

url=http://tadalafilvip.com/ says...
generic tadalafil in us

url=http://lsviagra.com/ says...
generic viagra in us