Shopping Cart
Your Cart is Empty
Quantity:
Subtotal
Taxes
Shipping
Total
There was an error with PayPalClick here to try again

Thank you for your business!You should be receiving an order confirmation from Paypal shortly.Exit Shopping Cart

*An old-school tabletop dungeon crawler that preserves the essence and feel of Advanced HeroQuest as much as possible. It retains most of the original mechanics, so it plays more like the old classic than Reforged does. The system can be very flexible, so purists may simply omit most of the new content for an experience even closer to the original.

*The old flaws in the vanilla rules have been fixed. Issues like monotonous characters, repetitive combat tactics, 1/12-chance dice rolls, etc. are a thing of the past.

*Implementing an improved system of combat actions and feats ported over from AHQ Second Edition but added with a few twists that give them a new shine. For example, actions like change places and push (borrowed from Second Edition) now acquire more depth when combined with the doorway-exploit fix used in this revision and vice versa, turning some encounters into real tactical puzzles. Combat becomes even more varied as the adventurers gain experience and acquire new feats and skills.

*Intended for Reforged veterans looking for an upgrade. However, the example GM Play Sheet included makes it very easy to start playing right away if familiar with the vanilla game, as the basic rules are the same. I know that the size of the rulebook may be discouraging at first glance, but it’s not that difficult once the player gets familiar with Slev’s rules. Most of the new content is used only between expeditions, and the game doesn't require monster matrices or to-hit tables, so the new rules don’t slow down exploration and combat in any way, quite the contrary.

*Slev’s sheer selection of equipment and treasure is used, which I believe is the largest ever offered in an AHQ variant.

*More than 70 Abilities, 120 Heroic Feats, and 22 Heroic Skills for character customization, including Slev’s. I believe that’s more than in any other revision of AHQ.

*Bestiary with more than 400 ready-to-play entries, entirely compatible with the original PV scale implemented in the old classic and all the other variants out there except Reforged. I’m not aware of a larger bestiary for AHQ anywhere else.

*Solo-play oriented design. I haven’t yet found another commercial tabletop dungeon crawler that delivers the same sense of tension and unpredictability while playing solo.

*Slev’s campaigns, equipment, magic, and treasure may still need to be revised extensively. For example, Reforged implements a lowered PV scale, so the WS, ST, and TH modifiers provided by some of its artifacts and spells may need to be adjusted accordingly. Also, Slev’s Enemy Loot Table may need some tweaks, considering the changes implemented in this revision.

*Slev’s bestiaries had to be redone and most of his PVs reassessed, and it’s still an ongoing process. There’re no canonical rules for determining the PV of each monster, so one has to proceed with imagination and common sense. The difficulty of the game is determined mostly by Common Enemies (which keep the original PV scale), not Elites and Characters, but some of their PVs may need further adjustments.

*More example Heroes and Henchmen are needed. Although this variant encourages the creation of characters from scratch, it’s always convenient to have a good selection of pre-made ones just in case.

*The Heroic Feats may need more playtesting to detect exploitable combinations and conflicts between them. The system is so mod friendly that more feats and skills can always be added, but I’d preferably look into the existing ones first.

*Although they perform reasonably well, it seems that some gameplay elements could use some work. I’m not particularly satisfied with Heroic Tokens as currency, for example, as I believe there could be even simpler ways more in tune with the original feel of the game. I’m still working on it.

*V1.81 moves toward the standardization of dice roll modifiers, making them easier to remember. However, there’s still work to do on the exploration tables.

*Some of the workings of this revision may still seem somewhat complex and/or complicated. I know it wouldn’t hurt to improve on simplicity and clarity in some parts.

*The presentation is still bare bones. I think it’s clear at this point that I’m more of a lawyer than a visual artist.

*Some of the text could use less wording and be rephrased for clarity, I know. I still struggle with English grammar sometimes, so please bear with me.

As usual, a detailed list of updates is included. Any feedback will be greatly appreciated. 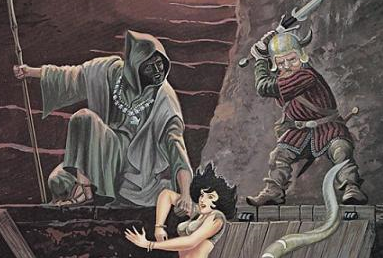